The Baghdad Battery: A “Lost Invention”!

While our main focus is helping inventors develop and patent new technologies which could potentially make the world better, VentorBridge is also interested in lost inventions: things once discovered which might have changed the world, had they not (for whatever reason) been lost again.

Electricity, for example, seems to have been found and lost again, at least once, in ancient times. If some bright scribe or scholar had done the right experiments back then – and not been burned (or stoned) as an Evil Sorceror! – the world today might be…well, just a little different. (grin!)

Back in the days of the Parthian and Sassanid Empires (150 BC-650 AD), it was common practice to store written scrolls by coiling them around rods of iron. The wound-up scrolls would then be slipped into copper tubes for protection.

One day, though, I think there was an accident…and a literally shocking discovery…. 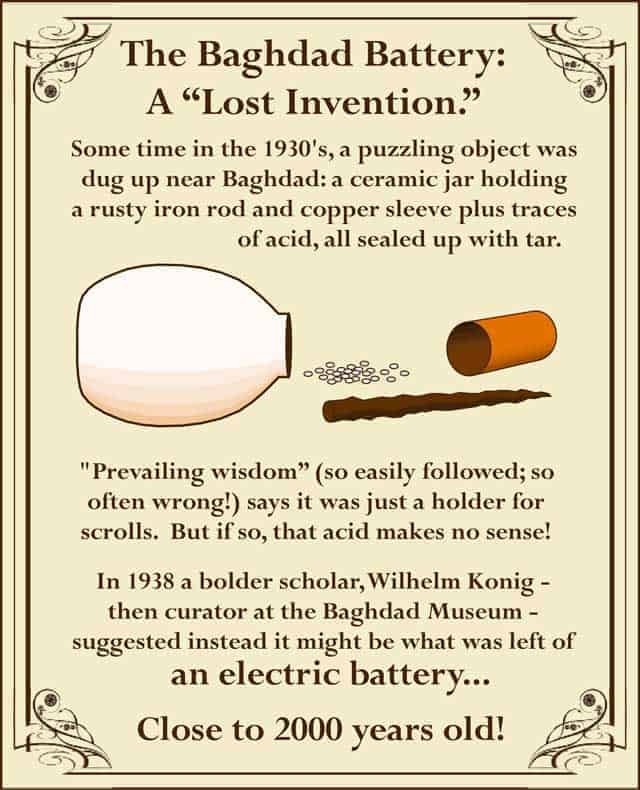 Sekanjabin is a traditional drink in the Middle East, much like the Greek oxymel – both names mean “sour honey” – loved by Cato the Elder (234-149 BC). It’s made (duh!) by mixing vinegar and honey, then thinning the result with water. Sea salt or herbal flavorings like mint are often added.

So maybe someone was getting ready to read, long ago, with a refreshing drink at hand… 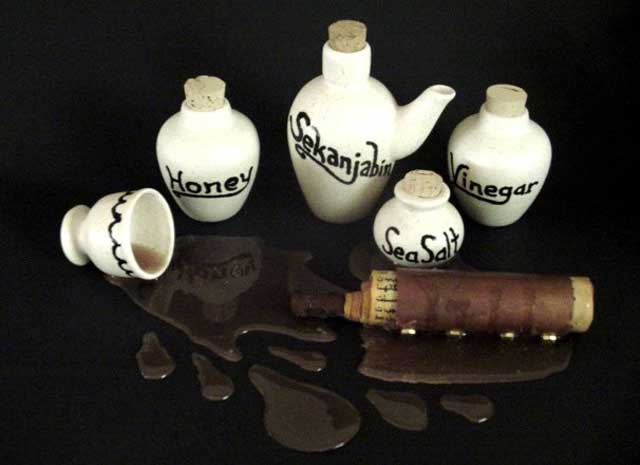 …And made a frantic dive to get the scroll, now wet with spilled sekanjabin, up out of the growing puddle, out of its tube, and dry again. Grabbing the copper tube with one hand, the iron rod with the other, and pulling. With hands probably also wet with sekanjabin. Which is a pretty good electrical conductor.

Iron happens to touch copper for a moment inside the tube, and… 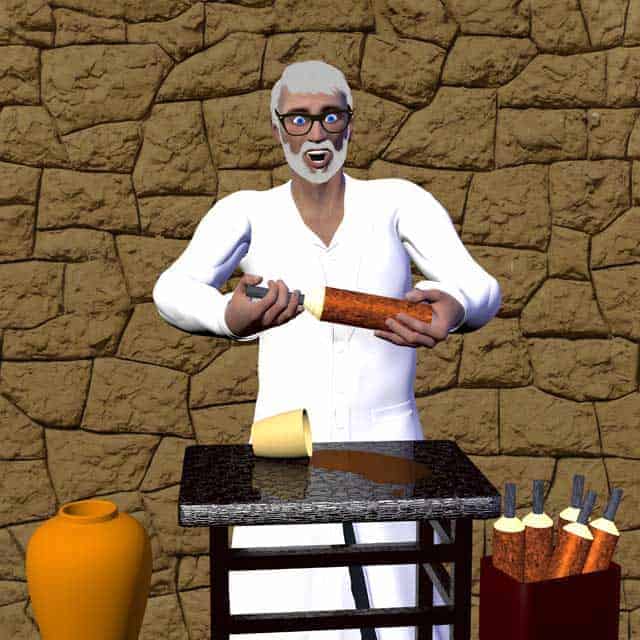 Maybe one experiment led to another, then – adding an outer ceramic jar to hold more sekanjabin, keeping the scroll soaked, and pouring in some bitumen (hard black tar) to hold the parts in place — and the Parthian battery was born. It’s often called the Baghdad battery since that’s the closest modern city to where its (no longer working) remains were found.

I’ve made a replica, using steel rebar (concrete reinforcing rod) as the inner roller and some copper roof flashing to form the tube. For bitumen I substituted black polymer clay, and for the original jar, one made and glazed at a local art studio. I made my own sekanjabin following a traditional recipe but adding a dash of salt. 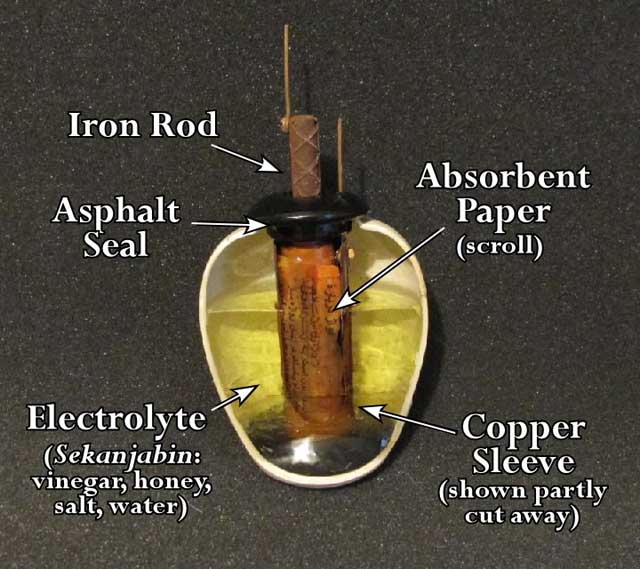 I couldn’t learn for sure what the Parthians used to make their scrolls, but at that time in history it was likely papyrus. I used the closest modern equivalent I could find: a paper towel. Its purpose is to hold the iron and copper apart with a wet, salty (conductive) and acidic (slightly corrosive) layer of sekanjabin – the electrolyte – in between them. 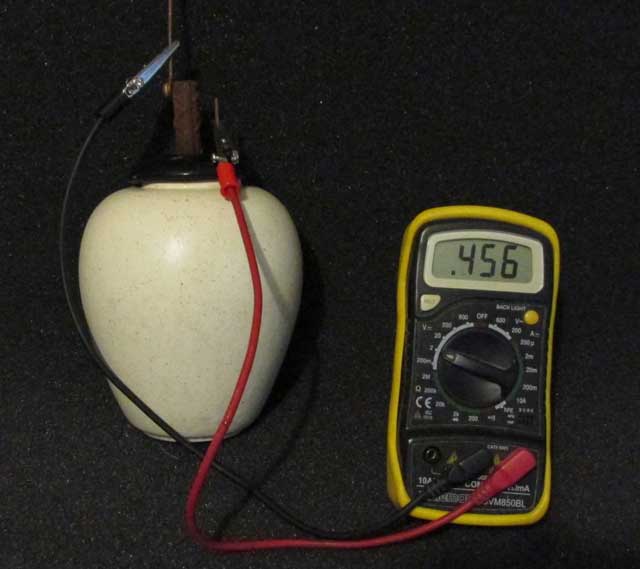 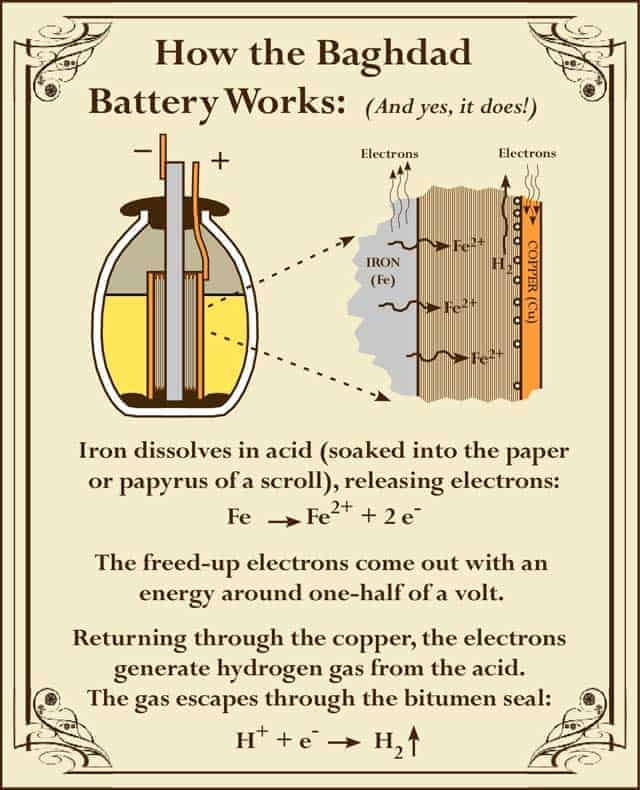 ‘Nuff said. After filling with modern sekanjabin and standing half an hour or so, the battery had an open-circuit voltage of .456 volt and a short-circuit current of 81 milliamperes. (The voltage slowly changes with time, usually downward, but can be boosted back up by cleaning the iron rod and refilling with fresh sekanjabin.) Not much by modern standards…but for nearly two thousand years ago, “not too shabby”!

In further research in 2018, VentorBridge went beyond sekanjabin to determine, from among the acids most likely available to the Parthians, which might actually have performed best in the battery.  A little to our surprise, red wine vinegar (with no salt added) outperformed all other plausible candidates.  Test data and a discussion of possible reasons for the observed results can be found at Lost Inventions 2018.

Alas, no one seems to have followed up on this discovery. Maybe the discoverer was indeed burned (or stoned) as an Evil Sorceror for scarily making people’s arms twitch. Or maybe nobody saw the potential for anything more than a “magic” trick. Because as Clarke’s Third Law tells us, “any sufficiently advanced technology is indistinguishable from magic.” Or in Heinlein’s words from Glory Road, “Magic is not science, it is a collection of ways to do things — ways that work, but often we don’t know why.” Science often comes along later, figuring out the “why.”

Maybe for the Parthians, that “why” never came.

Or maybe the device did indeed see some limited use.

The Middle East is full of ruins, wreckage and remnants of this civilization and that. Among artifacts dating to the Parthian era (and also from classical Egypt and Rome!) are coins and small figures made of bronze or silver with very thin coatings of gold. Old-school archaeologists say this was done by dissolving gold in mercury, coating the objects, then heating to drive off the mercury, leaving the gold behind. If done without due caution, though, inhaling the fumes would likely have killed the person doing the heating. In addition, the coatings are often thinner and smoother than could be expected from mercury gilding. 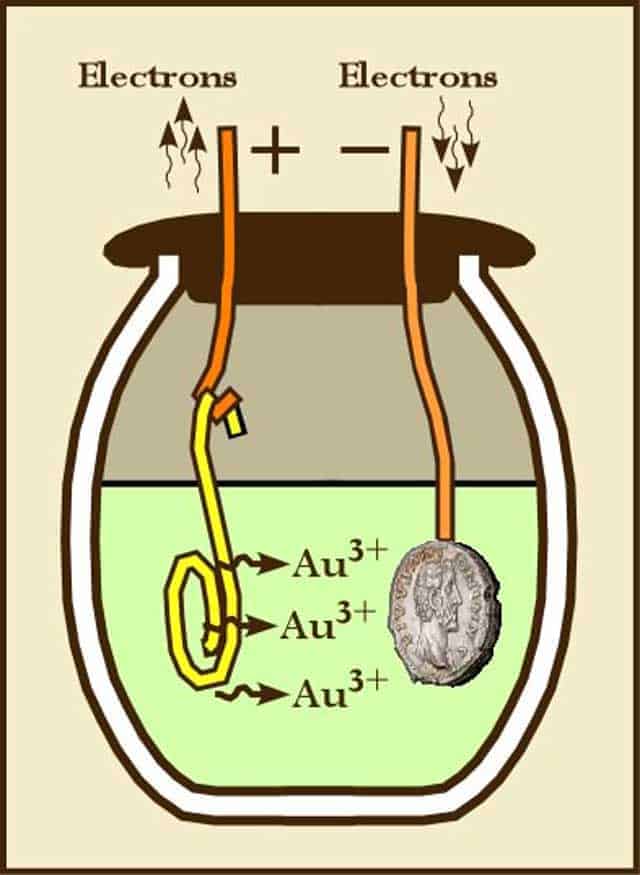 Thin, smooth layers of gold are easily applied, though, by electroplating. Here, a gold bar or wire is hung in a liquid containing dissolved gold, the object to be coated is hung next to it, and an electric current is passed between them. The current causes gold to deposit from the liquid onto the object, while at the same time more gold dissolves to replace what was lost:

Most gold electroplating today uses very toxic cyanide compounds, probably unknown to the ancients, but there are other ways. Gold can also dissolve in, and be electroplated back from, sulfite solutions. An alchemist or scholar in ancient times could have made these by burning sulfur and dissolving the off-gas (sulfur dioxide) in water containing lye. Some added iodine, obtained from burnt seaweed, might have improved the quality of the plating.

Was this actually done? Who knows?

Can it be done…using only materials and equipment known in Parthian times? I hope to find out, by personal experiment. Watch this space!