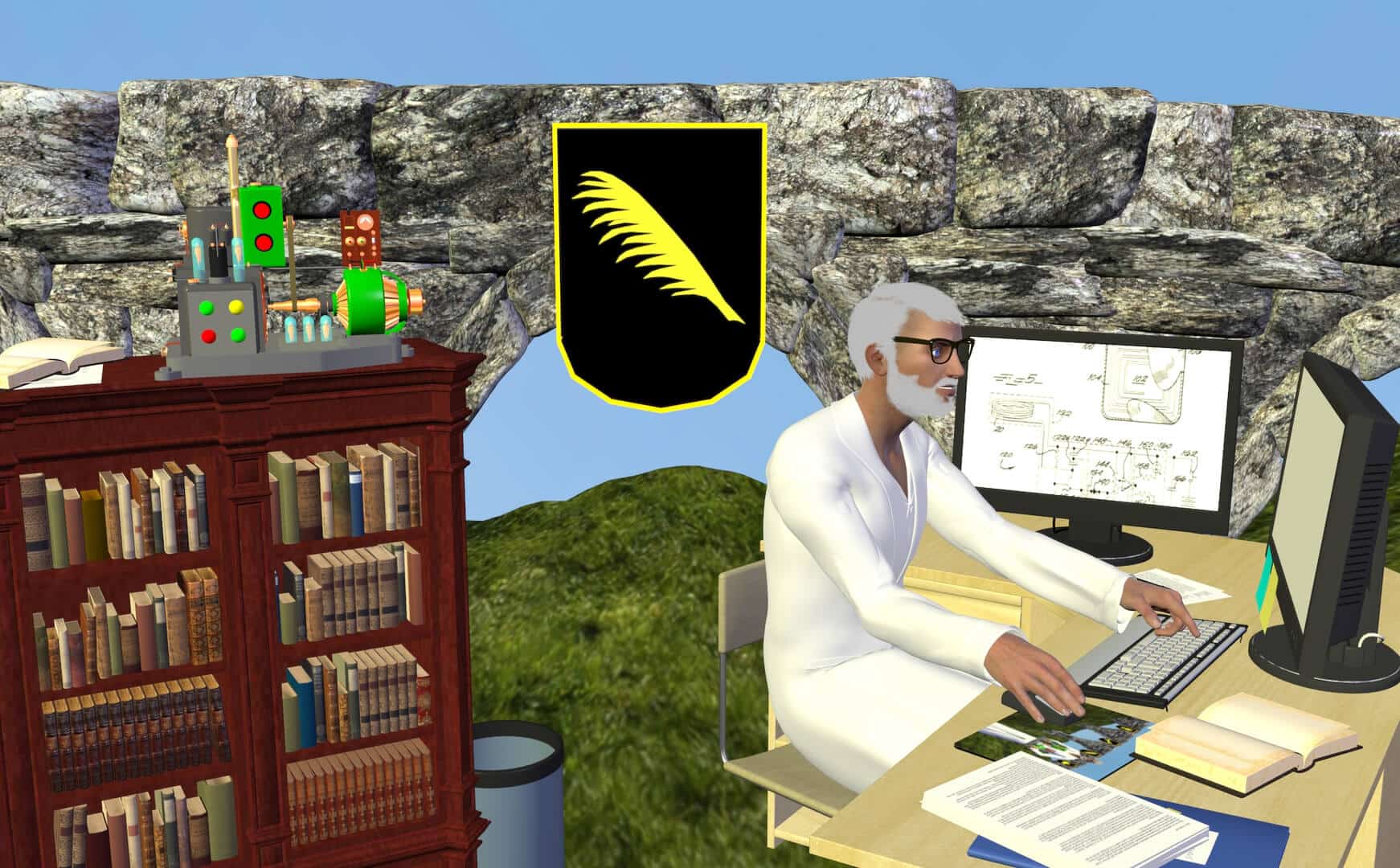 Once the invention is conceived and (hopefully) reduced to practice, it’s time to write the specification and prepare the figures. These will normally follow the same format you’ll hope to see in the actual patent when it issues. 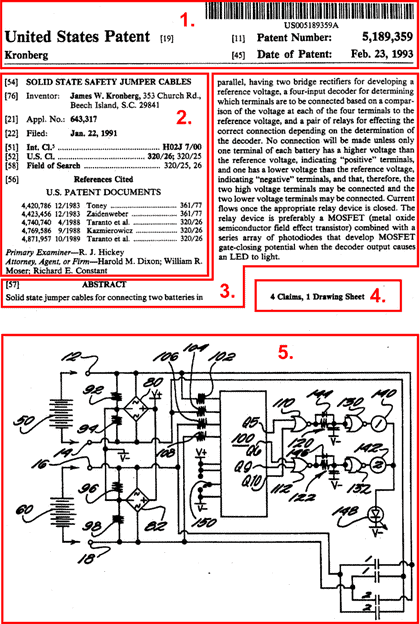 (1) The header. This identifies it as a United States patent, gives the patent number, issue date, and last name of the inventor (or if several, the first one named in the application “et al.”), plus a bar code with the patent number in scannable form.

(2) The title, names and addresses of all inventors, the application number (assigned by the PTO), filing date, names of the examiner and patent attorneys, and some other information regarding the PTO’s search.

(3) The abstract. This is a short summary of the invention, normally in 150 words or less.

(5) A reproduction of one of the patent figures. This makes it easier to distinguish one patent from another when you’re searching through a lot of them. The PTO gets to decide which of your figures to use. 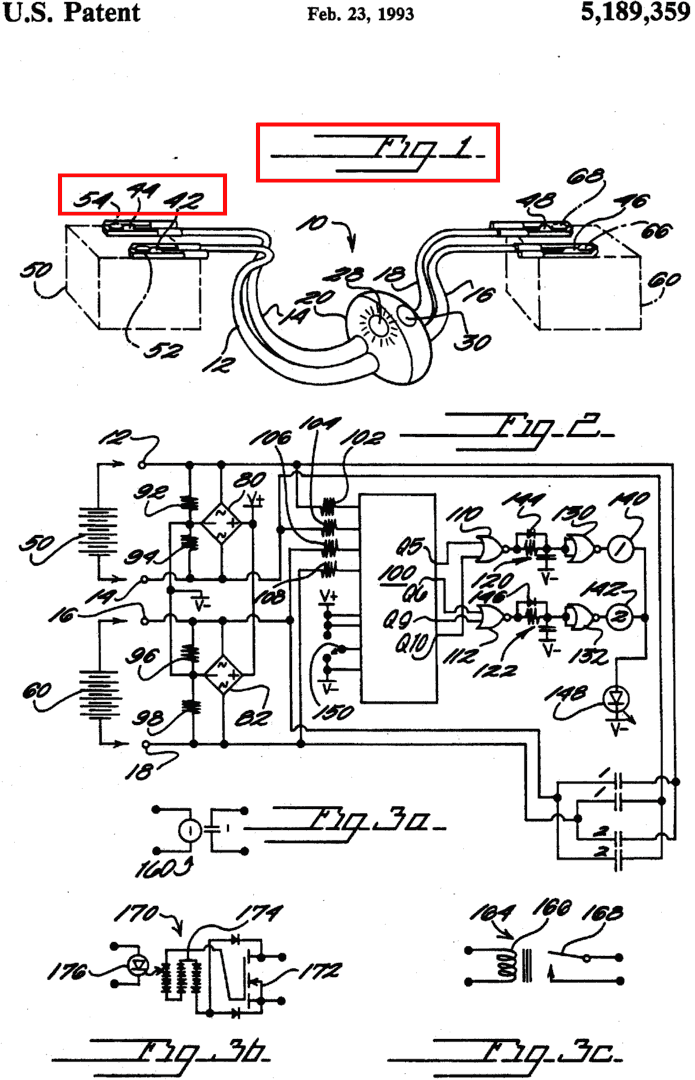 The drawings sheet(s) hold one or more Figures which may be electrical schematics, mechanical drawings, flow charts, or whatever other graphic aids will help explain the details of your invention. Traditionally they were hand-drawn in India ink like those shown above, but the Patent Office now accepts black-and-white computer graphics and, for an extra fee, even black-and-white photographs. Color is not acceptable.

Each Figure contains “reference characters” connected by lines to its main features so they can be cited in the text without confusion. Examples of reference characters above, for instance, are the “42,” “44” and “54” enclosed by the red outline. We will see these numbers again in a following section.

The text specification is a technical explanation of the invention, in as much detail as possible.  Detail is important here because the PTO will not allow a claim unless it is supported by the specification.  That’s normally done here.

In the issued patent the text specification will appear in numbered columns, two columns per page.  Lines of text will also be numbered up the center for easy reference, while the patent number will appear at top center.  The PTO handles this formatting; it’s not the inventor’s problem.  The inventor is responsible, however, for all of the content.

The text specification should normally hold the following sections: 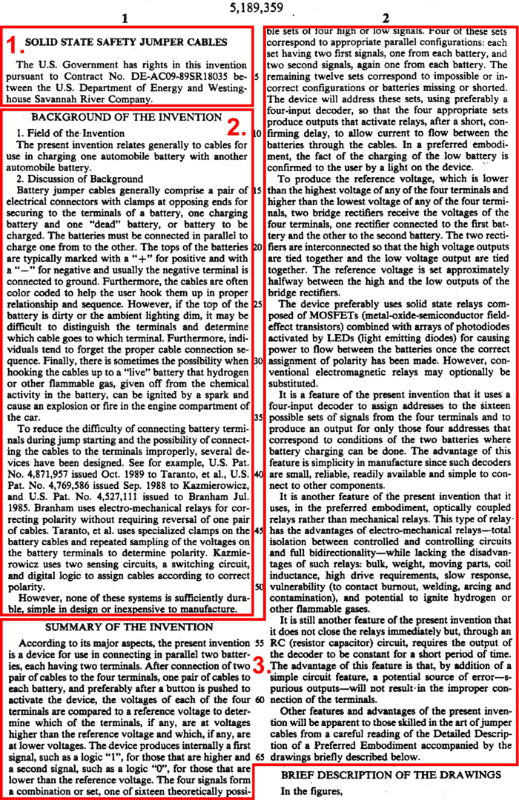 (1) The invention title. (Since this example invention was made under Government contract, a statement including the contract number appears just under the title.)

(2) Background of the Invention. What does it do? Why is it needed? What have others done before to try to solve this or other, related problems? Why were these unsuccessful, or less than satisfactory?

(3) Summary of the Invention. Briefly state what the invention is, and how it overcomes the deficiencies of the prior art. What makes it better? What are the specific features you believe make it novel, non-obvious, and useful? 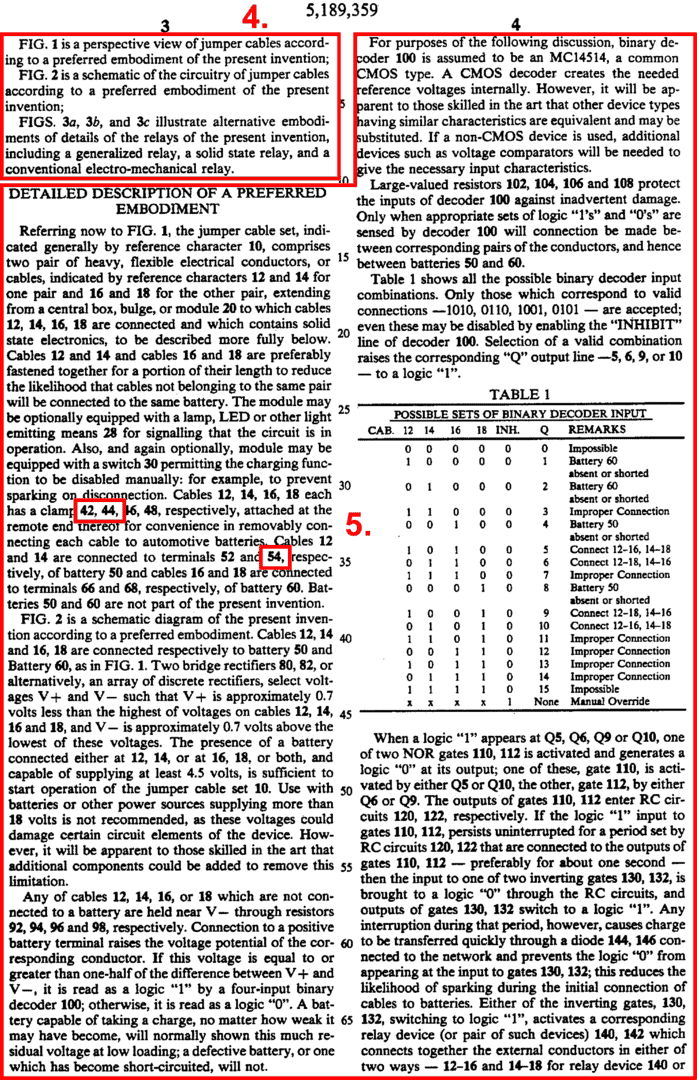 (4) Brief Description of the Drawings. A one-sentence paragraph for each numbered Figure, explaining what it is.

(5) Detailed Description of a Preferred Embodiment (or “Preferred Embodiments” if more than one). This is the “meat” of the application. It needs to describe every feature of the invention which might be patentable, and support each of them as well as possible.

Normally each mention of a feature or part of the invention will refer to one of the reference characters (numbers) in the Figures. For example, the mentions of “clamps 42 and 44” and “terminal 54” in the text specification reference these same numbered items in Figure 1. 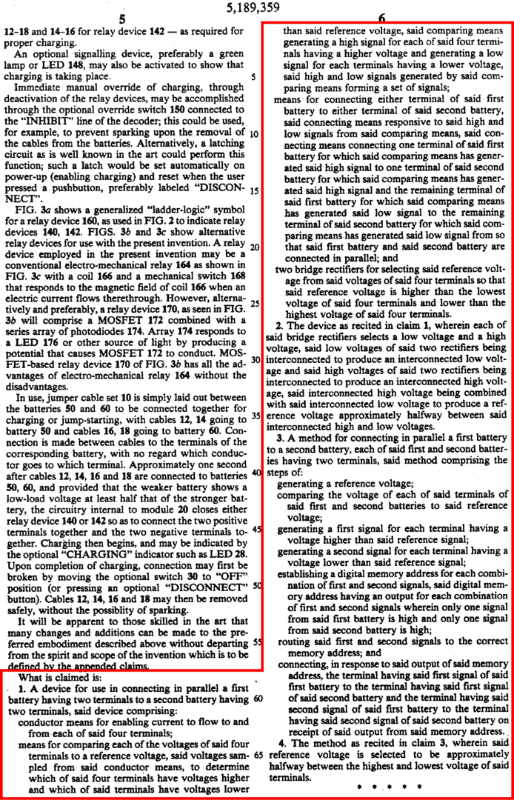 The text specification may run to several pages or tens of pages, or in rare cases even to a hundred or more. It gives way to the claims with the standard final text line, “What is claimed is…” (or less often, “We claim….”)

Claims are the “legal substance” of a patent. The number of claims in a patent forms a very rough indicator of the patent’s value. Patent examiners can’t dispute or force you to change anything else in your application (though they can reject the whole thing if it doesn’t fit one of those statutory categories!) so they focus hard on the claims and you, and your attorney, will need to be prepared to defend them. We’ll see more about that in “Defending the Claims.”

Your patent attorney will normally not permit you (or VentorBridge) to write the claims. These have to be couched in a particular dialect of “legalese” in which few others are fluent.

Your attorney will need your help, though, in identifying what specific features to claim. The claims must be supported by language in the specification. A good start is to include a few paragraphs in your Summary of the Invention saying “It is a feature of the present invention…” and describing in detail what its most important and novel features, differing from and improving upon the prior art, actually are. See for instance the examples below, from patent #5189359.