The Baghdad Battery: “Name That Acid”

The Baghdad Battery (technically, a single electrochemical cell) was not preserved well enough to let the traces of acid in it be identified. Was it fruit juice? Wine? Vinegar? Something else?

Likely once the “magic” was discovered, Parthian sages worked to make it stronger by identifying the best acid from those available to them by experiment. These likely included a variety of fruit juices, along with wines and vinegars made from them. 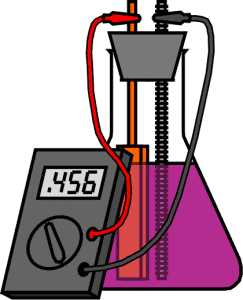 That last one needs a little explaining. While no reference to liquid sulfuric acid (“oil of vitriol” as the alchemists called it) is known prior to about the year 1300, there is no reason why a crude, dilute form could not have been made in Parthian times, by dissolving in water the gas (sulfur trioxide) formed either by burning a mixture of sulfur and saltpeter or by roasting ferrous sulfate (“green vitriol”). All of these starting materials were well-known and readily available for use in a battery or otherwise. Sulfuric acid was therefore included among the materials tested.

In addition, salt and sulfur were identified as plausible extra ingredients. Salt added to any acid generates at least trace amounts of hydrochloric acid, a powerful corrosive speeding up metal dissolution and thus boosting the battery’s power. Sulfur might have modified the surfaces and electric properties of the metals, especially the copper, since copper sulfide is a semiconductor. Copper sulfide, in fact, was the semiconductor used in the 1920’s to make the world’s first known transistors (J. E. Lilienfeld , U.S. Patents #1,745,175 and #1,900,018), long before their better-known reinvention (using a different material) at Bell Laboratories in 1947:

Each of the acid liquids was therefore tried in a set of four otherwise identical batteries, made with modern chemical flasks: one using the liquid pure, another with salt dissolved in it, a third with a little sulfur, and the last with salt and sulfur together.

“Made with modern chemical flasks”? How did these resemble, and how did they differ from, the ceramic-pot original?

VentorBridge built each battery inside a 250-milliliter Erlenmeyer flask fitted with a standard size 6, two-hole rubber stopper. The holes in the stopper had to be reamed out slightly, however, to accommodate and support the electrodes.

One of these electrodes was a half-cylinder of copper sheet, ¾” in diameter and 2 ½” tall, supported inside the flask by a length of ¼” copper tubing. The 2 ½” electrode length was chosen to match the planned depth of electrode submersion in the flask. The two copper pieces were joined with solder, then the solder was painted over with liquid insulation (Gardner-Bender “Liquid Tape”) leaving only pure copper exposed to the liquid. 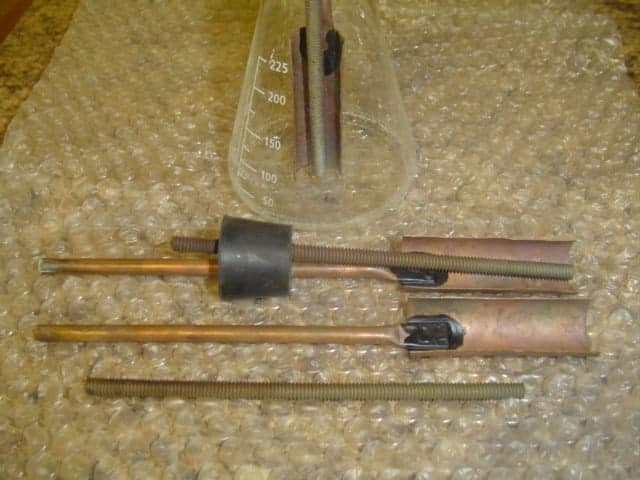 When dry the electrode was inserted through the stopper from below, checked in an empty flask for proper depth, adjusted if necessary, then set aside. The original set of four electrodes was used throughout the tests: one of them dedicated to plain liquid, one to salt, one to sulfur and the last to the combination of both, as identified by ink marks on the copper supports.

The second electrode in each battery was a 6” length cut from ¼” black iron (not zinc-plated) threaded rod, first degreased with acetone and then pickled in commercial-strength hydrochloric (“muriatic”) acid to remove the surface oxide exposing bare iron.

A comparison trial at the start of testing showed the scroll in the original battery (here represented by porous, unbleached paper cut from a brown paper napkin) separating the iron and copper likely did serve a useful function, prolonging the life of the battery by slowing voltage drop-off. As a result, after rinsing and drying each rod roughly 3” at one end of it was wrapped in paper just as in that original trial, secured with small pieces of insulated solid copper wire wrapped around it. 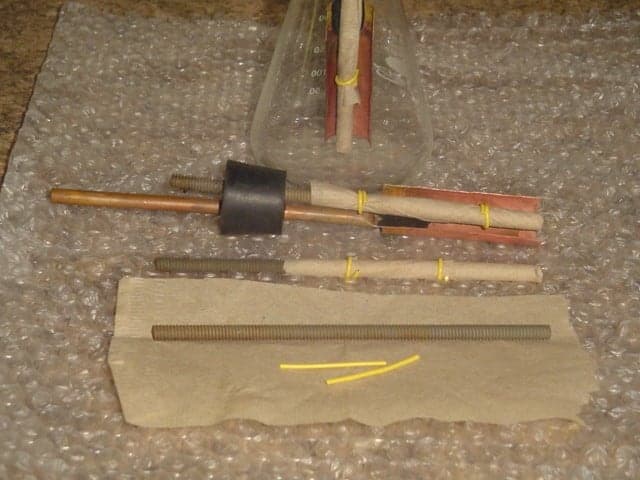 To begin each test, four identical flasks were rinsed well first with distilled vinegar and then with distilled water. One gram of sea salt (Morton’s Sea Salt “from Spain”) was weighed out and placed in the “salt” flask; one-half gram of powdered sulfur (Walgreen’s Sublimed Sulfur, from an old purchase; the product has since been discontinued) into the “sulfur” one; and one gram of salt plus half a gram of sulfur into the flask labeled for both. Each flask was then filled to the 200-milliliter mark with the chosen acid and shaken vigorously for thirty seconds to mix the ingredients.

Tests in 2017 had shown the iron rod in a Baghdad battery became permanently roughened and covered in surface deposits, chiefly iron oxides but often with metallic copper also present, during operation. For uniformity and reproducibility, therefore, a fresh iron rod was used for each 2018 test.

Immediately before use the copper electrode (still held in the stopper) was first rinsed in white distilled vinegar, wiped with a soft cloth to dislodge deposits, then rinsed again in distilled water, by placing the stopper holding it into a flask holding each liquid in turn and shaking vigorously for thirty seconds. After removal from the water flask the copper was shaken free of clinging drops, then a fresh iron rod was inserted through the stopper from the bottom and its lower, paper-wrapped end was adjusted to lie in the center of the curved copper, flush with its lower edge.

The stopper, holding both electrodes, was then inserted into its respective flask. A voltmeter was immediately connected and the voltage watched closely while it first rose as the new liquid wetted the paper and the electrode surfaces, then after about thirty seconds leveled off. The “leveled” voltage was recorded; then a load, consisting of a 1000-ohm resistor, was connected and the new, slightly lower voltage was recorded again.

After this had been done with all four batteries they were left undisturbed for twenty-four hours, leaving the loads connected. Voltages were measured again after one hour, three hours, eight hours, and at the end of the twenty-four. A consistent pattern of declining voltage appeared: sometimes fast, sometimes slow, occasionally with slight rebounds over time, varying with the acid used and whether or not salt or sulfur had been added. For example: 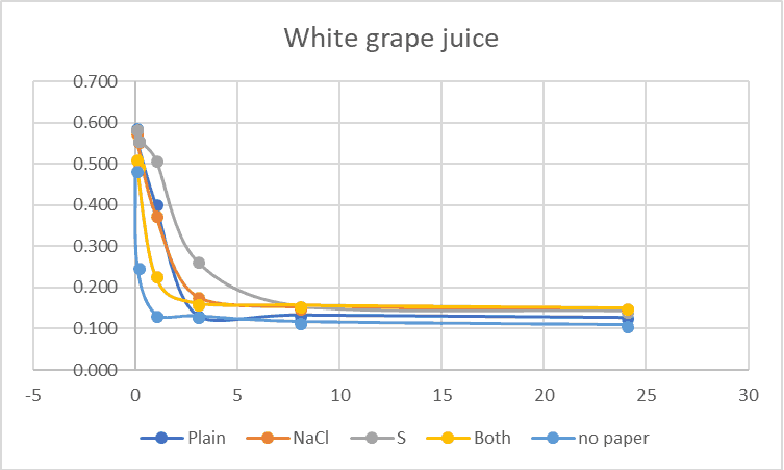 A single test without a paper separator, for comparison – using white grape juice, the first acid tested in the 2018 program – showed a much faster voltage drop than was seen with paper present. A weakness noted in the 2017 study was that copper somehow migrated through the acid from the copper electrode to plate out on the iron one. As the copper covered more and more of the iron surface, the battery became increasingly shorted out causing the output voltage to drop. Using a paper separator – just serendipitously provided, 2000- years ago, by the soaked Parthian scroll! – greatly slowed this process.

The results of tests with the other acids chosen are shown at the end of the text: one chart for each acid, followed by four combined charts showing the results for all acids either plain, with salt, with sulfur, or with both.

For detailed analysis, a measure of total battery performance was taken as the final voltage measured after 24 hours with the 1000-ohm load in place (hereafter, “the 24-hour voltage”). Numerical values for this voltage are shown in the table below:

Color has been used in the table to highlight data of special interest. In the central body of the table, 24-hour voltages above 0.3 volts are highlighted in green, those from 0.29 to 3.0 in yellow, and those between 0.25 and 0.29 in orange. In the side and bottom bars the highest, second and third highest average voltages, and the lowest, second and third lowest pH’s (representing highest acidity) are similarly coded.

A little surprisingly, since battery performance depends on the dissolution of iron by the acid, the 24-hour voltage did not correlate strongly with the pH of the acid used. Had that been the case, lemon juice, lime juice and white wine vinegar would consistently have outperformed all other combinations, and all points on the chart below, plotting 24-hour voltage against pH, would fall on a single line. The facts that apart from lemon juice they do not, and that red wine vinegar worked as well or better despite its higher pH, show some additional mechanism must have been at work. 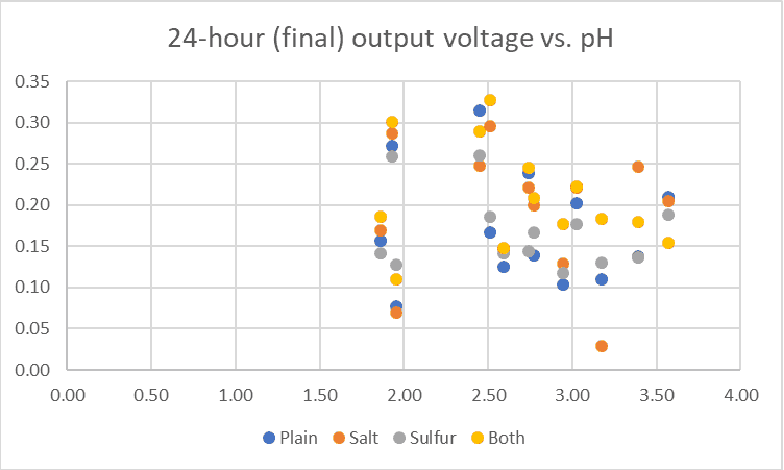 The effects of salt and sulfur on the 24-hour voltages were inconsistent. Salt, as expected, increased the voltage since it forms a well-known series of complexes with iron. A complex is a chemical combination of a charged metal atom (an ion) with other substances to form a single, larger and usually more soluble ion. Formation of complexes can thus be expected to keep the iron surface a little cleaner, rather than fouled with oxides (rust) which as electrical insulators could slow or stop electrical generation.

Sulfur, on the other hand, typically decreased the output voltage a little. Sulfur combined with both iron and copper, creating layers of semiconducting sulfides on their surfaces. Unlike oxides, metal sulfides are often semiconductors (like graphene or silicon) so it was uncertain how a lightly sulfided copper surface would compare with a clean metal one. In testing, sulfide surfaces usually performed more poorly.

With salt and sulfur both present, quite surprisingly the performance was improved over that of either plain acid or acid with either salt or sulfur present alone. The reason for this is unclear and may merit further research later.

The best all-around performance (0.330 volt after 24 hours) appeared with dilute sulfuric acid (pH 2.50), sulfur and salt all present. While this is a barely plausible Parthian combination, given that all the starting materials were known and available, still it seems rather a stretch given that the first known reference to liquid sulfuric acid (“oil of vitriol”) does not appear until more than a millennium later.

Pure red wine vinegar, on the other hand, performed nearly as well as sulfuric acid “plus,” with a 24-hour voltage of 0.318 volt. Wine vinegars were surely well-known in the Parthian Empire, since its city of Ramiyan was famed throughout the then-known world for its wines. Surprisingly, in this case neither salt nor sulfur brought any improvement. While white wine vinegar was more acidic (pH 1.94) it performed much more poorly.

The key to red wine vinegar’s success as a Parthian battery acid may lie in the variety of fruit acids it contains.

All grapes and grape products naturally contain tartaric and malic acids. Fermentation to vinegar then creates first acetic acid (found in all vinegars) and then lactic acid (better known in spoiled milk).

Of these, tartaric acid forms strong complexes with both iron and copper, helping them dissolve. Preventing oxides (or sulfides) from building up on the electrode surfaces likely keeps them cleaner, improving performance. The combination of a high tartaric-acid concentration with the acidity provided by the other acids, therefore, may have caused this liquid to perform better than the rest.

Without detailed analysis, it is unclear why the red wine vinegar so far outperformed the white.

Based upon these results, VentorBridge suggests that ordinary red wine vinegar, readily available in the Parthian Empire and likely without salt or other additives, may in fact have been the acid finally chosen for use. 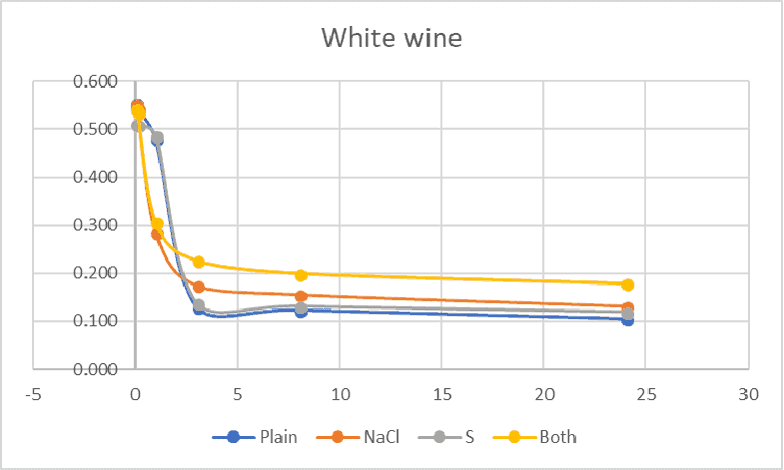 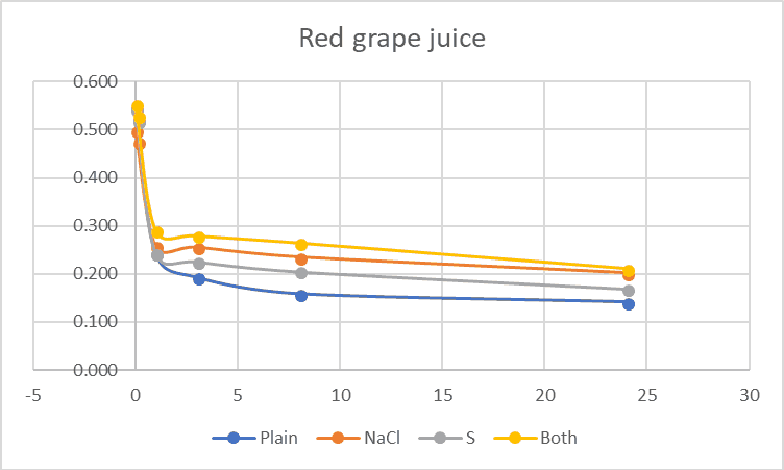 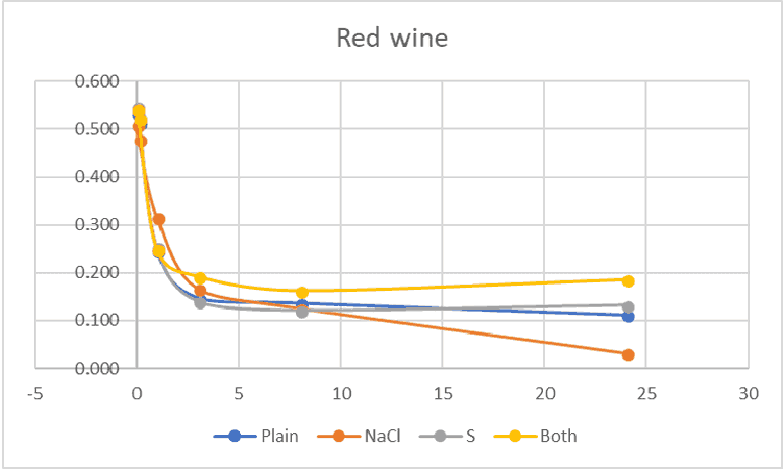 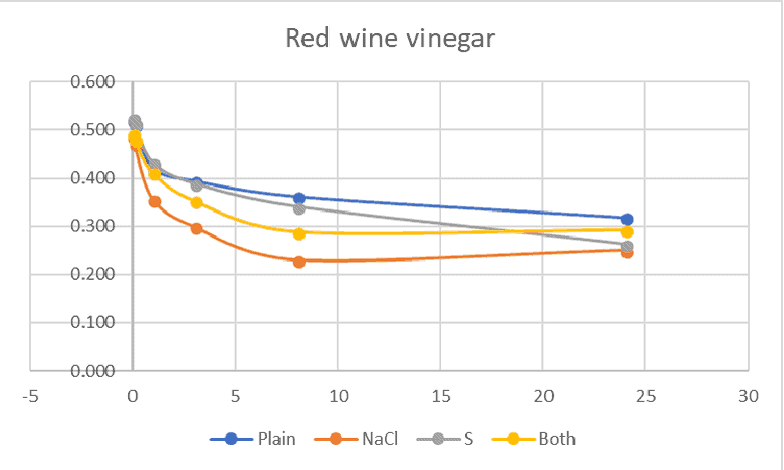 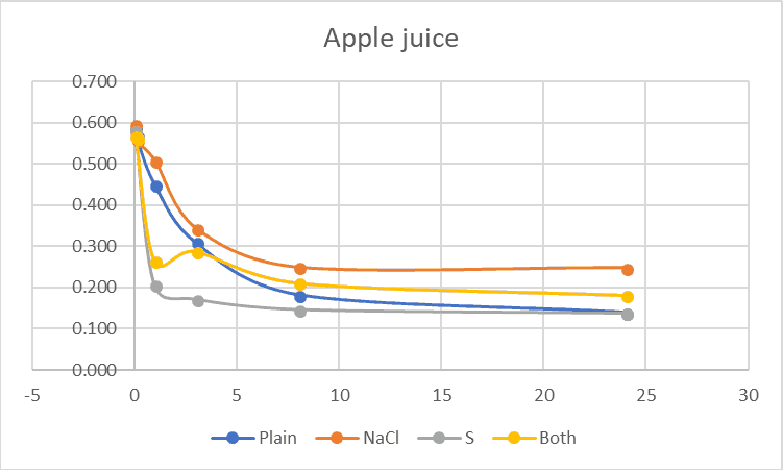 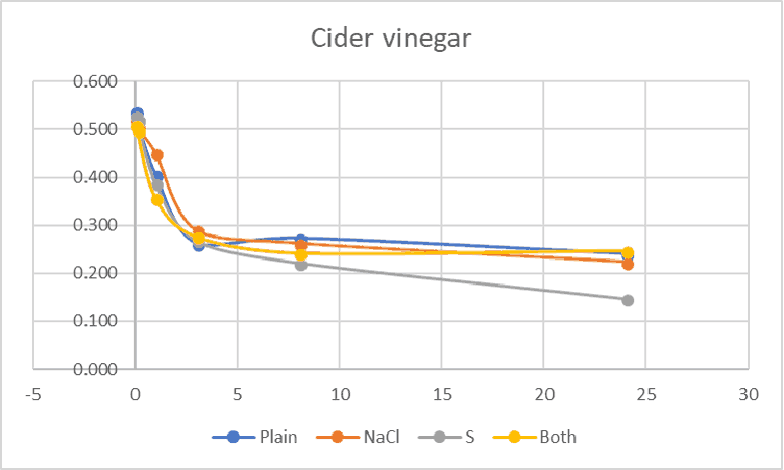 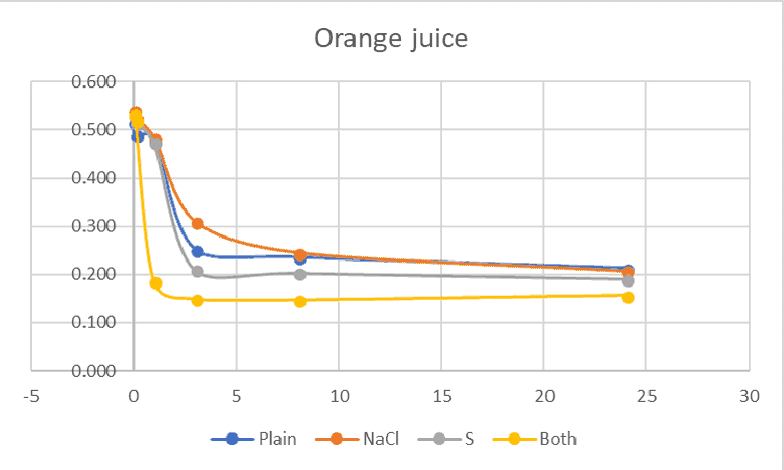 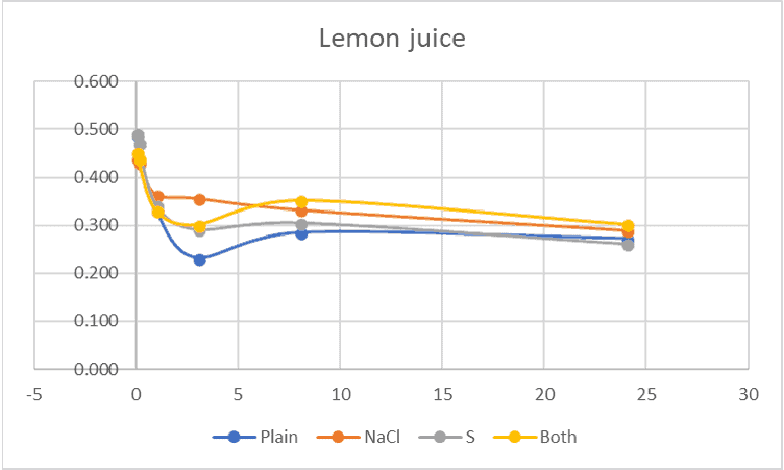 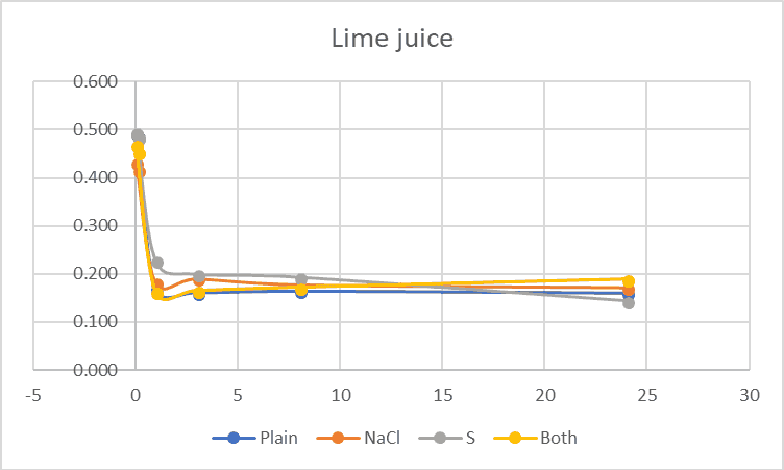 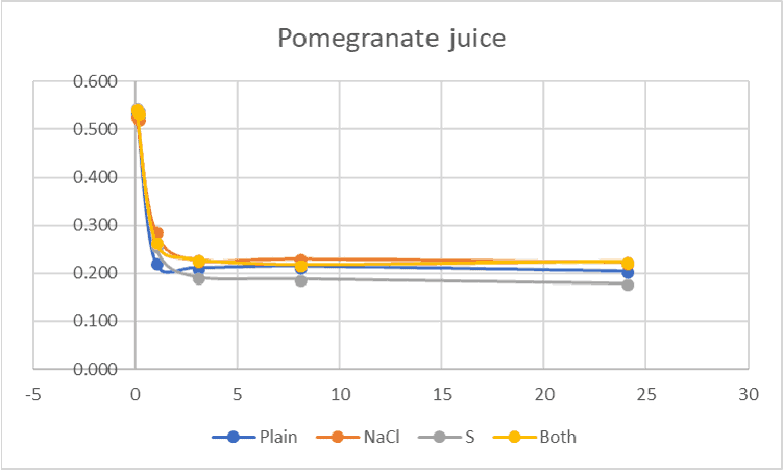 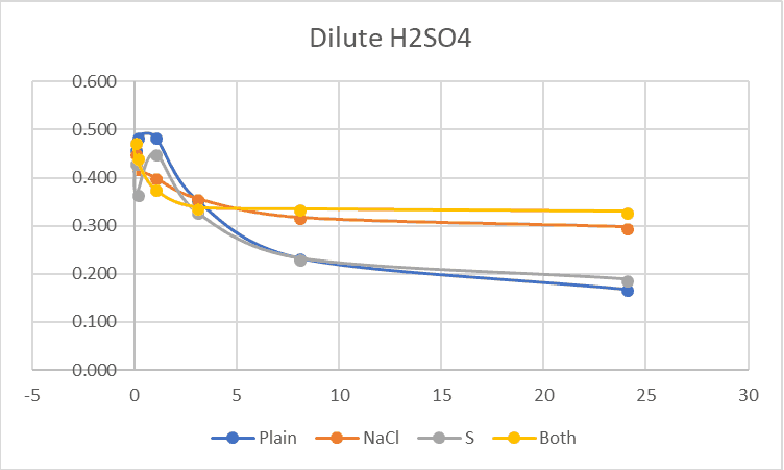 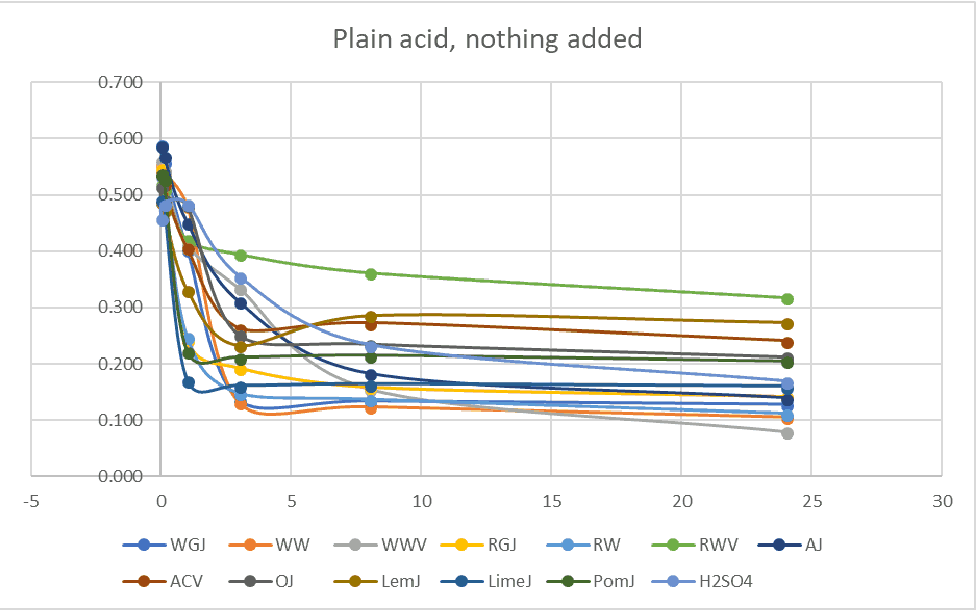 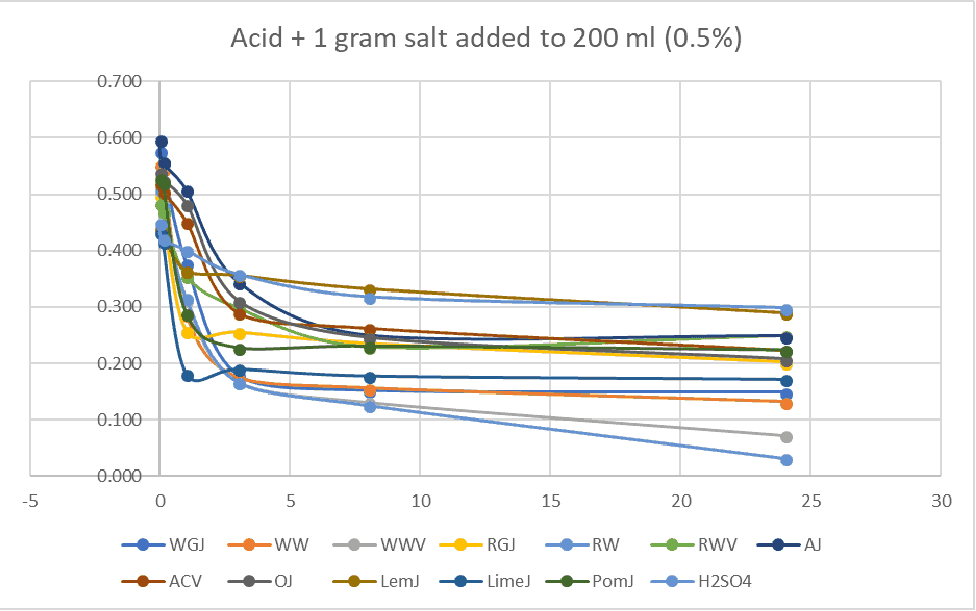 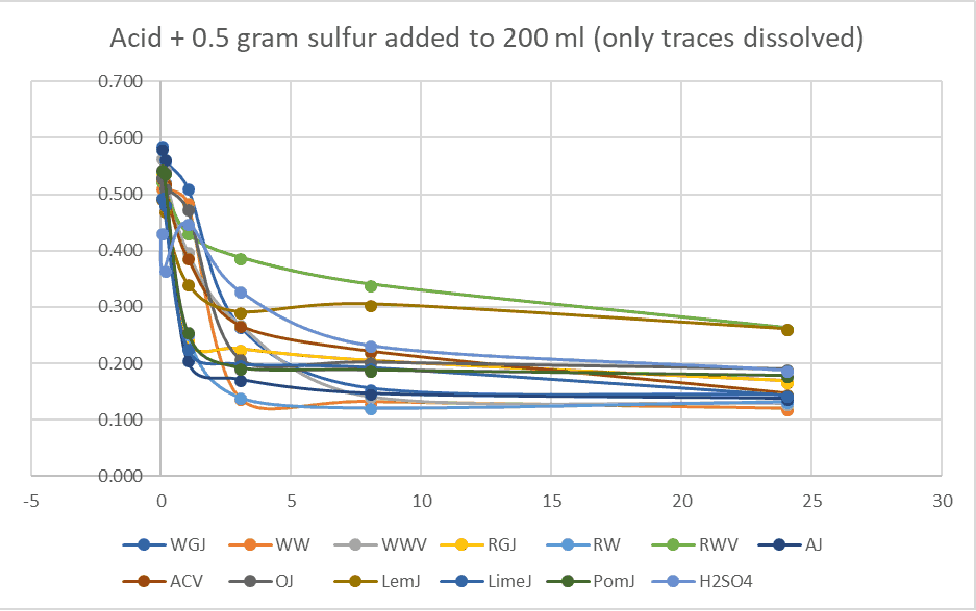 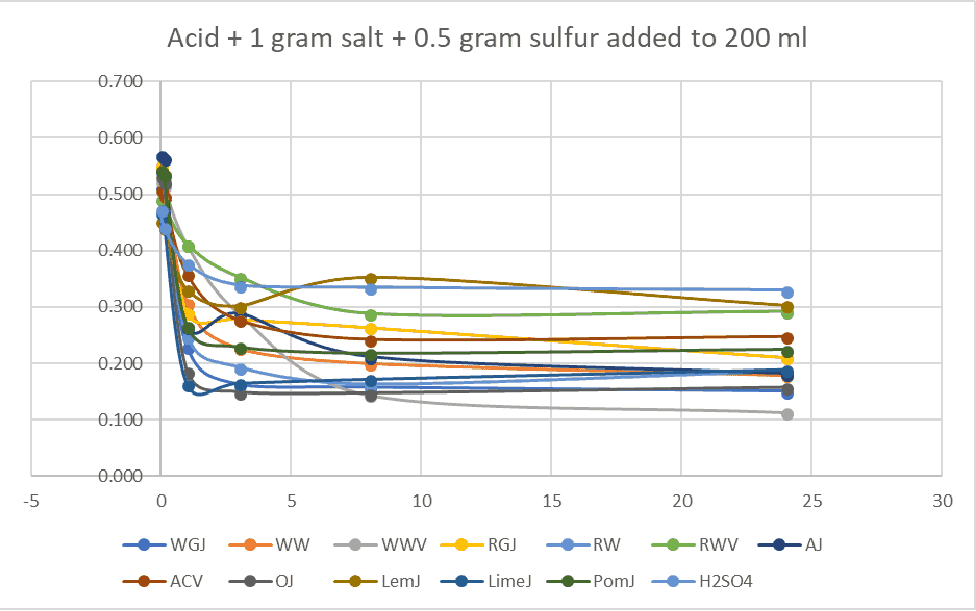